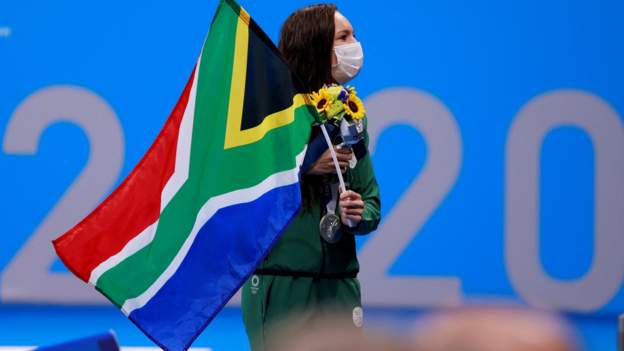 Tatjana Schoenmaker and Bianca Buitendag both won silver on day four of the Olympics to claim South Africa’s first medals of Tokyo 2020.

BBC Sport Africa will be updating this page with the highlights for African competitors on day four at the Tokyo Olympics.

South Africa’s Tatjana Schoenmaker had to settle for silver in the women’s 100m breaststroke as she finished behind surprise winner the USA’s Lydia Jacoby.

Schoenmaker qualified fastest for the final having set the Olympic record in the heats but was edged out by 17-year-old Jacoby for the gold with USA’s world record holder Lilly King winning bronze.

“It is amazing. I really hope this brings a little bit of hope for South Africa and we are obviously going through a tough time at the moment,” she said.

“If that shows us there’s hope in South Africa then it is because obviously, we know sport unites countries we have seen it with the rugby world cup so hopefully the Olympics does the same.”

She has another chance in the pool when she races in Wednesday’s heats of her preferred event the 200m breaststroke, in which she is the reigning world silver medallist.

“I am a bit nervous for that but I am excited we have a whole days rest. I can’t wait to sleep a little and refocus for the 200,” she added.

“See how it goes in the heats and then build up to that I am ready and I feel I am in a good place and in good form.”

Her compatriot Chad le Clos reached Wednesday’s final of the men’s 200m butterfly third fastest after he won his semi-final.

The 29-year-old is aiming for his fifth Olympic medal and second gold, after he won the 200m butterfly title at London 2012.

Bianca Buitendag of South Africa claimed silver in the women’s surfing as the sport made its debut at the Olympics.

On Tuesday the 27-year-old beat Portugal’s Yolanda Hopkins and USA’s Caroline Marks to reach the final, which had been rescheduled from Wednesday due to a bad weather forecast.

“I surprised myself. It was a wonderful experience. I think it was one of the most wonderful weeks of my life. I will never forget it. I’m so proud to be South African,” she said after winning her medal.

South Africa’s men were stunned by Argentina in the quarter-finals of the rugby sevens 19-14, despite the South Americans ending the game with just five players.

The South Africans, who won bronze at the Rio games in 2016, scored first through Selvyn Davids and soon after Argentina’s Gaston Revol was sent off for a body check.

Despite being a man down Argentina fought back to lead 14-7 at half time, a lead they extended after the break. South Africa got back into the match with a penalty try with 20 seconds remaining as the Argentines saw Lautaro Bazan Velez sent to the sin bin.

Argentina recovered the restart and ended the match by putting the ball in to touch to claim their place in the last four where they will play Fiji.

South Africa will now have to play Australia on Wednesday in the matches to decide places from 5th to 8th.

Earlier in the day South Africa had beaten USA 17-12 to finish top of Pool C.

Kenya lost all three of their Pool C matches as they were beaten 12-7 by Ireland on Tuesday. The Kenyans then beat hosts Japan 21-7 in the play-offs for 9th to 12th places.

That win sees them face Ireland again on Wednesday to determine who finishes ninth and tenth.

There were shocking scenes in the men’s Olympic heavyweight preliminary rounds on Tuesday as Morocco’s Youness Baalla attempted to bite his New Zealand opponent David Nyika.

The 22-year-old Baalla’s actions were missed by the officials during the fight but he was disqualified after the bout for unsportsmanlike behaviour.

Nyika later was in a forgiving mood after the incident as he posted on social media urging people not to aim any abuse at Baala.

“The heat of battle can bring the best AND worst out of people. This is part of sport,” he posted.

“I have nothing but respect for my opponent and can appreciate the frustration he must have felt. *Please don’t reach to him if you have nothing nice to say*.”

Nigeria women’s basketball team lost 72-81 to USA in their opening Group B with the MVP from the 2019 Afrobasket, Ezinne Kalu top scoring for the African champions with 16 points.

“We got our jitters out of the way as this is the first game and everyone came out a bit nervous, but I think we buckled down and played our game and played Nigeria basketball.” Kalu said.

“I am really glad at how we competed today – with a team like USA you have to play perfectly to beat them and I think we came out and fought as hard as we could.”

In the other game in the pool France lost 70-74 to Japan.

Next up for Nigeria will be France on Friday before they finish their group campaign against hosts Japan on Monday. 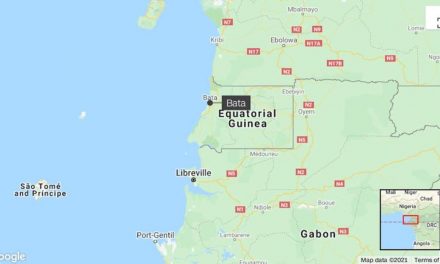 Africa: Children Left Behind in the Treatment of HIV 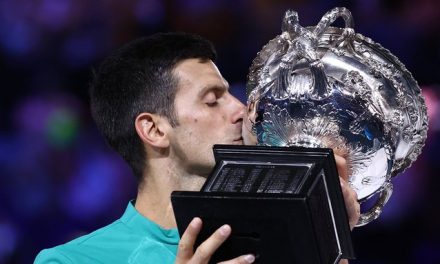