Number of missing in Japan mudslide narrowed to 24 from 64 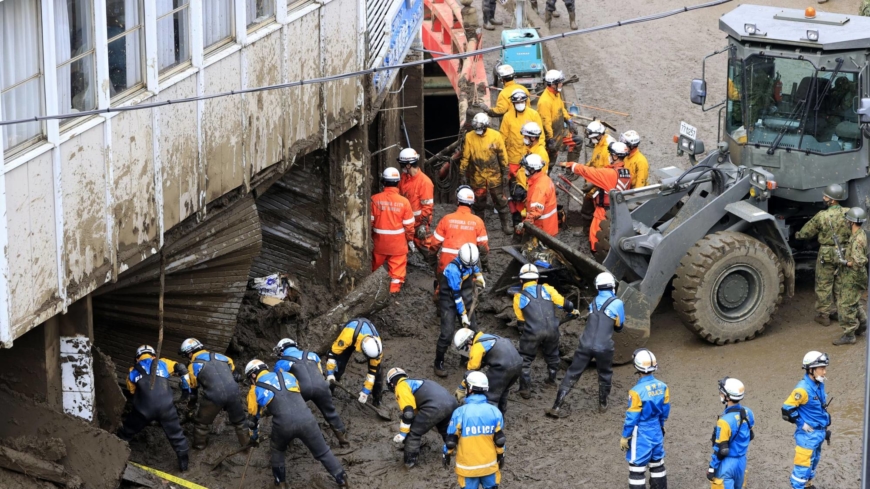 The number of those considered missing following a large mudslide in central Japan was dramatically cut Tuesday from an earlier reported 64 to 24 by local authorities as rescue efforts approached the end of the crucial first three days.

The municipal government of Atami, Shizuoka Prefecture, had been trying to locate 64 people registered as residents in the affected area but said the whereabouts of 41 people had been confirmed while another person had been added to the list.

The list may have included those were no longer living at their registered addresses when the mudslide occurred Saturday, destroying at least 130 houses. The death toll currently stands at 4.

Firefighters, police and Self-Defense Forces personnel, meanwhile, continued to remove debris and search mud-swamped houses in the hot spring resort town southwest of Tokyo as the clock ticked down to the end of the first 72 hours, when most survivors of such disasters are found.

Local authorities suspect the massive mudslide was exacerbated by about 54,000 cubic meters of soil that had been brought to a mountainside for construction work.

Some 100,000 cubic meters of soil in total collapsed into a nearby river around 10:30 a.m. Saturday, traveling a distance of about 2 kilometers.

Africa: Why the African Union’s Decision On a Top Post Is Being Seen As a Litmus Test

Kenya: She Shapes the City – a Gallery of Extraordinary Kenyan Women