Nigerian Goals Out of Europe – Nwankwo Serves Crotone With a Brace

Nwankwo scores a brace to give Crotone hope

Simeon [Simy] Nwankwo scored a brace for Crotone in their 4-1 win over Benevento on Sunday.

The forward, who was part of the 2018 World Cup Nigeria national squad, scored once in each half to help his side to a crucial three points that should ease their relegation headache.

Nwankwo was in the thick of the action and he forced Benevento defender, Kamil Glik, to head an own goal in the fourth minute.

He started the move for the second goal from the Crotone half and was on hand to apply the finishing touch with a neat finish in the box. Nine minutes into the second half, he was on hand again to apply a neat side-footed finish for a 3-0 lead.

Nwankwo then provided the assist for Milos Vulic, who added the fourth for the home side on 65 minutes before Iago Falque got a consolation for the visitors on 82 minutes.

Crotone are still bottom of Serie with 12 points from 18 matches, but they are now just two points from safety.

Nwankwo is his side’s leading goal scorer with six goals, and three have come from the penalty spot.

Another Nigerian appearing for a relegation-threatened side, Oluwasemilogo [Semi] Ajayi, scored for <a target=”_blank” href=”https://twitter.com/WestBromNews”>West Bromwich Albion</a>, in a 3-2 win over Wolves on Saturday.

The Super Eagles defender looped a header over Rui Patricio in the 52nd minute to draw his team level at 2-2.

Matheus Pereira scored the winner from the penalty spot in the 56 minutes.

Ajayi has scored twice in this campaign [West Brom have scored 14 goals in total] and both goals have come from headers.

West Brom are 19th on the EPL table, five points from safety.

Agu arrives with a goal

Felix Agu scored his first league goal of the 2020/21 Bundesliga season last Saturday at the Weserstadion in Bremen.

The 21-year-old forward, courted by Nigeria, scored the clincher for his Bremen side. after Theodor Gebre Selassie gave the home side the lead on 84 minutes.

Agu’s goal quickly followed three minutes later, a side-footed finish, to ease his side’s nerves as they held on for just their fourth league win in 16 matches.

Bremen are 12t on the table and Agu has made four appearances, three from the bench, and his first start was the one in which he scored.

Former Nigeria U-23 forward, Umar Sadiq, continues to show off eye-catching form as he notched a brace for Almeria to the Round of 16 Copa del Rey in a 5-0 win over La Liga side Alaves.

The 23-year-old scored his first in the eighth minute-a neat left-footed finish at the right post.

His second came in the first minute of added time-an impudent back flick after he won the ball inside the box.

He has scored nine goals in 18 league appearances as Almeria make a firm push for a return to La Liga. 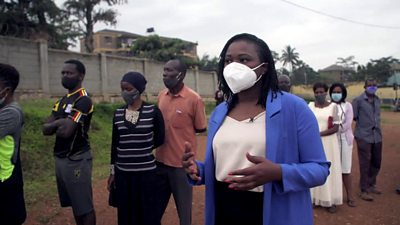