THE youthful Alex Miller made a fine debut at the Tokyo Olympics when he came 31st in the Men’s Cross Country mountain bike event yesterday, finishing nine minutes and 12 seconds behind the winner, Thomas Pidcock of Great Britain.

One of those who pulled out was one of the pre-race favourites Mathieu van der Poel of the Netherlands, who took a heavy fall on the first lap and although he battled on bravely, he eventually withdrew with a lap to go.

Miller, who was the youngest participant at 20 years of age, got off to a slow start, but gradually improved as the race wore on. At the end of the first lap he was lying 34th and then dropped a further position by the second lap.

He, however, made a fine recovery, moving up to 33rd position by the fourth lap and 32nd by the fifth lap, before moving up to 31st place on the sixth lap.

Miller managed to hold his position till the end and even made a ‘wheelie’ when he crossed the finishing line, which received some cheers from the crowd and commentators.

Miller later said he struggled at first, but later managed to get into a good rhythm.

“It was really hard from the beginning, and the heat and humidity played quite a big role. I had a good start to the race, but then made a few mistakes on the second and third laps. From there on I just tried to get into a good rhythm and then just pushed as hard as I could till the end.

“I finished 31st and I’m fairly happy with that. I know I could have done a little bit better, but for my first Olympics I’m really happy with that result. I’d just like to say thank you for all the support I got from my team mates, my coach and everyone back home, its really been great,” he added.

“The weather was actually OK, it was probably a bit more humid than I would have liked it, but then again, the same factors are at play for everyone so you just have to remember that. The cooling down was very important today but I think I managed that quite well,” he said, adding that the track was ‘super dusty and a really fun track to ride on.’

Miller received a lot of support from the Japanese public around the course and also had a special word of thanks for them.

“The Japanese came out in force today, I thought especially considering the current situation in Japan, with their strict Covid-19 regulations, I’d really like to thank them,” he said.

The president of the Namibia Cycling Federation Axel Theissen said it was a great performance by Miller.

Ït was an awesome ride by Alex. His 31st position might not sound great, but if you bear in mind that he was the youngest participant and finished the course unscathed and without being lapped, by the world’s top professional riders, then that’s really a remarkable achievement. He also started in 37th position on the last row of the starting grid, so he managed to improve his position by six places,” he said. 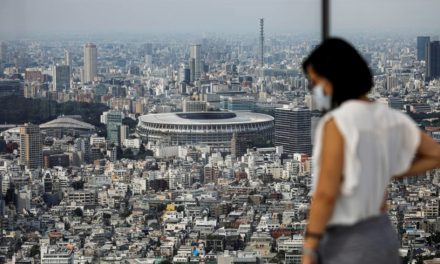 Disappointment over decision to host Tokyo Olympics without spectators