JUNIOR Tennis kicked off with a successful post-lockdown tournament as 83 players aged under 10 to under 25 competed in Windhoek in both single and double matches over the weekend.

In the boys under 10 division De Witt Bergh came first with Tadiwa Mombeyarara in second place.

Linda Alemu was the overall winner for u10 girls as she first beat three opponents in her round robin group and then went on to beat Elrica Nakusera 8-0 in the final. Liha Tromp came in third after beating Janah King 8-3.

In the u12 division 20 single matches were played in the round robin group stage with four players promoted to next round.

The final went down to the wire with the 9-year-old Theron starting off leading each set but then being hauled in by the 11-year-old Nel. In the end it was only a few points that made the difference with the first seeded Samuel Nel taking gold with a score of 7-6(3), 7-6(6) in the final.

In the girls u14 semifinals, the fourth-seeded Mari van Schalkwyk pulled off a surprise by beating the top seeded Joanivia Bezuidenhout 5-7, 6-3, 10-5, while Santie van der Walt beat Zoe Bronkhorst 6-2, 6-1 in the other semifinal. In the final there was no stopping Van Schalkwyk as she beat Van der Walt 6-0, 6-2.

In the boys under 14 semifinals, the top-seeded Lian Kuhn beat the third-seeded Abraham Alemu 6-4 and 6-4, while the second-seeded Eduan Schollij beat the fourth-seeded Corne Koen 6-1, 6-4.

In the boys u16 semifinals, the fourth seeded Stephan Koen surprised the top seed Oliver Leicher with a 3-6, 6-2, 11-9 victory, but it was the 12-year-old Ruben Yssel who took the title after beating Koen 7-6, 6-2 in the final.

Dominique Theron dominated the girls u16 division by beating Kyla Gille 6-3, 6-4 in the final.

In line with tennis tournaments in neighbouring countries, Namibia Junior Tennis has introduced an under 25 division in stead of the traditional under 18 section. This was done in the first place to give stronger and more varied competition to under 18 players, while it also expands the number of tournaments available for young adult players who aspire to be competitive.

The girls u25 category only had two entries with Elze Stears beating Larushka Kruger 6-0, 6-0.

In the other group George Louw’s toughest competition was Dantago Gawanab whom he beat 6-3, 7-5.

Namibia Tennis Association extended its gratitude towards Sanlam for their gracious sponsorship.

“It is sponsorships like these that ensure the continuity of junior tournaments in Namibia. Without regular tournaments we are not able to develop the local tennis talent to become more competitive and we are truly thankful for Sanlam for their continued support over the years,”it said in a statement.

The next junior tournament will take place in Swakopmund on the weekend of 10 September. 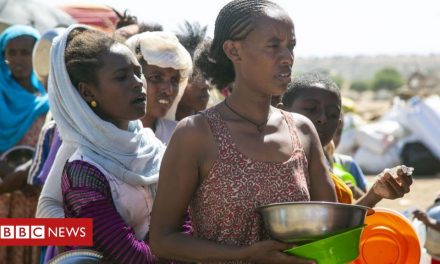 Viewpoint: From Ethiopia’s Tigray region to Yemen, the dilemma of declaring a famine

Kenya: Fans Asked to Get to Spectator Stages Two Hours Prior to First Car