Hakuho and Terunofuji still perfect after 13 days in Nagoya 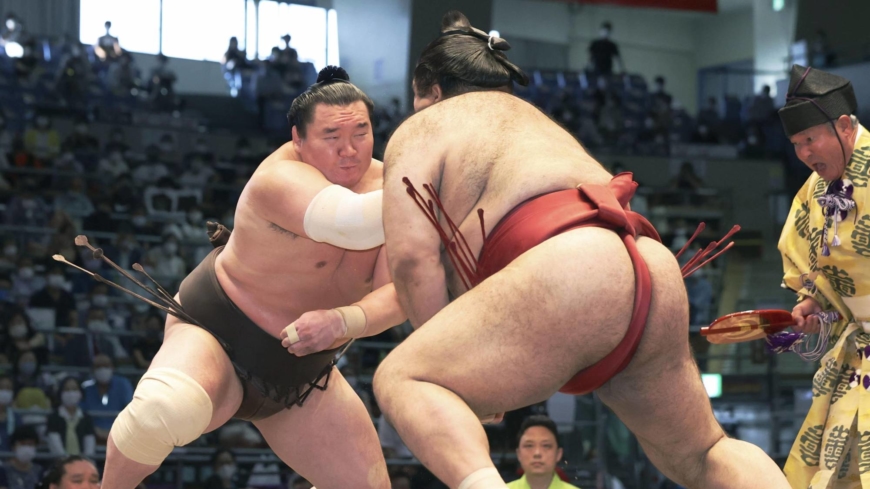 Yokozuna Hakuho and ozeki Terunofuji stretched their perfect runs at the Nagoya Grand Sumo Tournament to 13 straight wins on Friday, leaving them on a collision course for the final-day title decider on Sunday.

Their 13th wins came in a contrasting manner, however. Terunofuji survived his first real scare in the 15-day meet at Dolphins Arena, where he fashioned a win over fellow ozeki Shodai that should be enough to earn promotion to the exalted rank of yokozuna.

Following an evenly matched initial crash, Shodai’s left beltless arm throw had Terunofuji off-balance near the edge. But Shodai (7-6) failed to pounce at the decisive moment and allowed Terunofuji to recover his ground.

Terunofuji regained his balance and withstood a weak pull-down move from Shodai, whom he then forced to the edge, where one last push sealed the win.

Terunofuji, the winner of the past two tournaments and needing a title or result as good to secure the promotion, will complete his stunning comeback from injuries with the pending decision.

The 29-year-old former ozeki was fighting in the fifth-tier jonidan in March 2019 but won his second Emperor’s Cup of career on his return to the elite makuuchi division a year ago and maintained his fine form since.

Hakuho, meanwhile, showed off good technique to dispatch sekiwake Takayasu (7-4-2), with the yokozuna showing no signs of decline despite the constant talk of retirement surrounding him due to his having missed all or part of the last six meets.

Initially missing his face slap, Hakuho quickly wrapped both arms around Takayasu’s right arm before swiveling the former ozeki down with an arm bar throw in seconds to remain tied with Terunofuji.

Sekiwake Mitakeumi (7-6) had not been at his best here but was dominant against No. 5 Okinoumi (5-8) in a force-out win.

Debutant komusubi Meisei (7-6) beat No. 6 Kiribayama (8-5) despite the maegashira dodging him on the opening charge. The komusubi kept his feet before getting matching underarm belt holds and forcing his opponent over the straw in a heated bout.

Wakatakakage (4-9), another new komusubi, secured a win after withstanding two pull-down attempts from No. 4 Kotoeko (2-11).

No. 10 Tamawashi and No. 11 Kotonowaka both won to improve to 10-3, although both were eliminated from title contention on Thursday.

Africa: Digital Media On the Frontline – Supporting the Ones Who Support the Rest