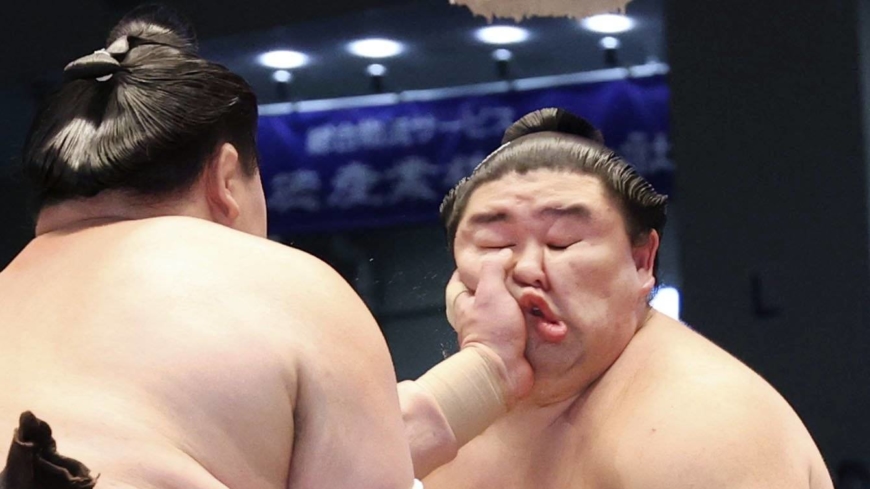 Yokozuna Hakuho, winner of a record 44 Emperor’s Cups, improved to a perfect 14-0 by defeating ozeki Shodai in highly unconventional fashion in the final bout of Day 14 at Nagoya’s Dolphins Arena.

The all-time great stunned onlookers and his opponent by lining up for the opening clash near the edge of the straw, then walking forward and unleashing a series of savage face slaps.

With Shodai (7-7) seemingly unsure how to counter Hakuho’s assault, the yokozuna took a belt hold and toppled the ozeki over the edge for a win by backward force down.

The big Mongolian once again showed strength and resilience to overpower a dangerous opponent from among the sport’s elite ranks. After being pushed onto the back foot, Terunofuji fended off former ozeki Takayasu with an extended arm and drove his way to victory.

Whether he wins or loses Sunday, Terunofuji’s performance at the 15-day tournament marks another stunning chapter in one of the sport’s most remarkable comeback stories.

The 29-year-old powerhouse looked destined for retirement after plummeting down the ranks due to debilitating health issues, including multiple knee surgeries. He began his comeback from the fifth-tier jonidan division in March 2019.

No. 13 Ura (9-5) continued his top-division comeback in impressive fashion, forcing out new komusubi Meisei (7-7), who needs a final-day victory to finish the tournament with a winning record.

Wakatakakage continued to struggle in his debut at komusubi, the lowest of the three sanyaku ranks beneath yokozuna, dropping to 4-10 with a quick push-out loss to No. 4 Chiyotairyu (4-10).

Among the rank and file, No. 7 Chiyoshoma, No. 9 Shimanoumi and No. 15 Tsurugisho earned their all-important eighth victories, ensuring they will finish with winning records and likely move up in the rankings.