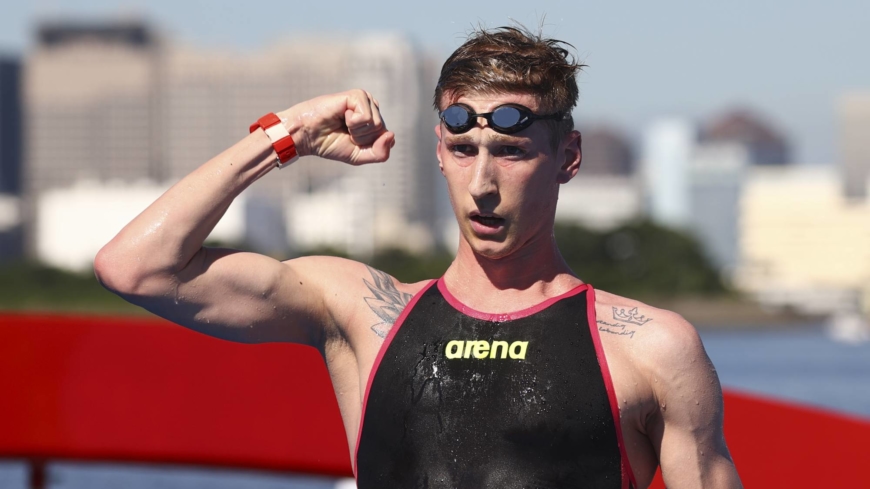 Florian Wellbrock of Germany powered to gold in the men’s 10-kilometer marathon swim at the Tokyo Olympics on Thursday, setting the pace early on as he retained a lead throughout the race that took him over the finish line.

Wellbrock broke away from the rest of the swimmers early in the race and spearheaded the laps around Tokyo’s Odaiba Marine Park, maintaining a steady lead throughout the race. Rasovszky and Frenchman Marc-Antoine Olivier stayed close.

Small groups of swimmers dotted the length of the course as they chased Wellbrock.

Cars and trains glided across the Rainbow Bridge, and a monument of the five Olympic rings could be seen in the distance as the athletes swam. Occasionally, surprised leapt out of the water.

Temperatures rose throughout the day under a cloudless sky and a sizzling sun that made surfaces hot to touch, with the water temperature measuring 29 degrees Celsius (84 degrees Fahrenheit) when the race started at 6:30 a.m.

Although at times Rasovszky was hot on his heels, Wellbrock refused to concede the top spot, eventually leaving behind the Hungarian on the last lap as he powered through the course.

His lead was so clear that teammates could be heard cheering and whistling well before he reached the finish line.

Wellbrock claimed bronze in the men’s 1500 freestyle on Sunday, and also won the world championship for the 10 km swim in 2019. He is just the second athlete to win a medal in swimming and marathon swimming at one Olympic Games, after Tunisia’s Oussama Mellouli.

Tanzania: Zanzibar Basketball League to Kick Off in January

Africa: How China Is Controlling the Covid Origins Narrative – – Silencing Critics and Locking Up Dissenters