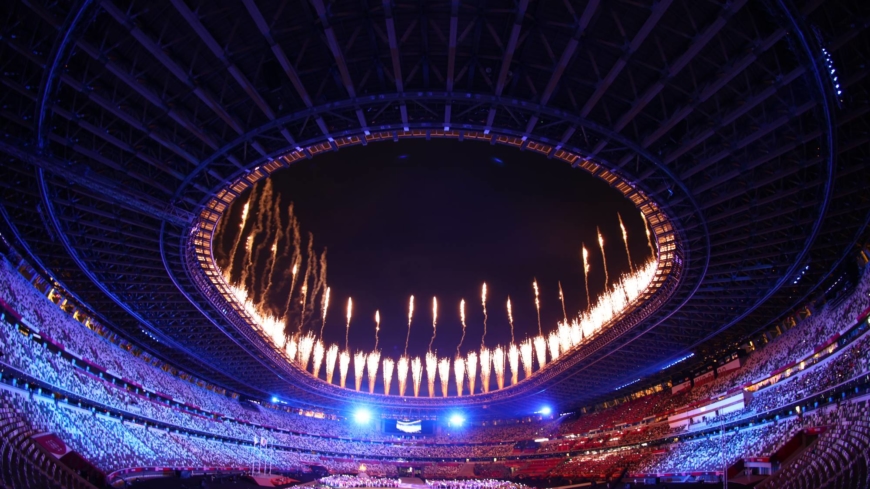 An Olympic Games not everyone was sure would get off the ground reached its endpoint at National Stadium on Sunday night, as many of this year’s Olympians gathered for the closing ceremony of the 2020 Tokyo Olympics.

Tokyo officially handed the games off to Paris, host of the 2024 Olympics. Tokyo Gov. Yuriko Koike passed the Olympic flag to International Olympic Committee President Thomas Bach, who waved it from side to side before handing it off to Paris Mayor Anne Hidalgo.

Bach hailed the efforts of Japan and the organizing committee for managing to stage an unprecedented Olympics during a pandemic.

The ceremony featured a large number of athletes, but not all. The measures in place to help prevent the spread of COVID-19 meant that many who competed early in the Games’ two-week run left Japan soon after their competitions.

The fans were also still missing. With little improvement in the COVID-19 situation in Tokyo, the stands at Japan’s expensive centerpiece venue were just as empty as during the opening ceremony on July 23.

Japan, as expected, was still represented by a sizable contingent of athletes, including members of the Samurai Japan baseball team that captured gold on Saturday and the women’s basketball team, which earned silver a few hours before the ceremony.

“There are no words to describe what you have achieved in Tokyo,” Tokyo 2020 President Seiko Hashimoto told the Olympians. “You have accepted what seemed unimaginable, understood what had to be done, and through hard work and perseverance overcome unbelievable challenges. This has made you true Olympians.”

Even with fewer athletes than usual, the ceremony opened with a more celebratory feeling than when the Games opened two weeks ago.

Members of the Takarazuka Revue, a theater with a history dating back over 100 years and one of the few in the world with an all-female cast, performed the Japanese national anthem.

Once the athletes arrived, and as the Olympic flame flickered in the corner of the stadium, ska musicians and a number of dancers took center stage, only ceding the spotlight long enough for more performers to enter to a rendition of the “Gurenge,” best known as the opening song for the popular anime “Demon Slayer: Kimetsu no Yaiba.”

As the music played, BMX riders, skateboarders and breakdancers (breaking, as the sport will be known, is on the Olympic program for Paris 2024) performed on a platform in the center of the stadium that was meant to resemble a typical park scene. The idea was to give the athletes a taste of Tokyo life, as virus prevention measures barred them from venturing out into the city.

The theme of the evening was moving forward, a nod to the world attempting to return to normalcy amid the COVID-19 pandemic.

“For the first time since the pandemic began, the entire world came together,” Bach said during his speech. “Sport returned to center stage. Billions of people around the globe were united by emotion, sharing moments of joy and inspiration. This gives us hope. This gives us faith in the future.”

The ceremony began with a highlight reel of some of the memorable moments from the field of play during the Games.

The Tokyo Olympics were Japan’s most successful ever from a competitive standpoint.

The jury is still out on everything else.

Japan won 27 gold medals — led by two each for Ohashi and gymnast Daiki Hashimoto — to blow past the previous record of 16 set in 1964 and 2004. The nation’s gold rush put it third on the medal table, behind only the United States, which finished with 39 golds, and China, which had 38.

The Tokyo Games managed to complete its 19-day run without being forced to make any major changes — excluding a long list of measures implemented before the Olympics — due to COVID-19. The virus, however, will always be inextricably linked to these Games. Cases among those connected to the Olympics passed 400 on Saturday and new cases in Tokyo surged to record levels during the event.

“Safety was our No. 1 priority and, overall, I believe that we were able to reach the closing day without any major challenges,” Tokyo 2020 President Seiko Hashimoto said during a news conference earlier on Sunday. “We’ll continue to take all possible measures to prevent the spread of the coronavirus.”

Japan’s athletic achievements helped provide a welcome, if brief, distraction for many, something sports have proven adept at during past times of strife. The fierce public opposition toward staging the Games as scheduled waned due to a feeling of inevitability before they started, and then shifted even further as Japanese athletes began winning medals.

These Olympics may have also brought about a reckoning over how mental health is handled in sports thanks to a conversation sparked by U.S. gymnast Simone Biles, who pulled out of the team all-around competition and some individual events to protect her mental well-being.

While public sentiment warmed, there was still opposition. There were protests against the Olympics before they started — the shouts of protesters could be heard during lulls in the opening ceremony on July 23 — and pockets of protests persisted throughout the Games.

There were also, however, fans willing to line up in scorching temperatures to take photos with the Olympic rings near National Stadium and plenty of spectators lined the marathon course in Sapporo despite being asked to stay away.

“You, the best athletes of the world, could only make your Olympic dream come true because Japan prepared the stage for you to shine,” Bach said.

“You, the Japanese people, can be extremely proud of what you have achieved. On behalf of all athletes, we say, Thank you, Tokyo, thank you, Japan.

The public wasn’t allowed to attend the Games in most cases. Fans — both domestic and international — were barred from attending all but a handful of events due to concerns about COVID-19.

Such measures created an unnatural atmosphere in many venues, where some sat eerily silent while others had public address announcers going through the normal motions and urging mostly empty venues to get loud, show their support, and pose and dance for cameras. Some basketball games had pregame performances on the court and a basketball-shooting robot at halftime, which were seen mostly by a crowd of volunteers, team officials and other Olympians.

Yet the Games were not completely devoid of atmosphere. Tokyo Aquatic Center was alive with the shouts and cheers of swimmers there to support their teammates, and jubilant Italians sang in the stands after the penultimate night of the track and field competition brought more unexpected gold to their nation.

The cheers, the singing and the chanting were all supposed to be banned according to the playbooks, the IOC’s all-encompassing guides for delivering a safe and secure Games. Those rules proved to be hard to enforce once the Olympics actually began, however. In addition to the cheering from teammates and officials in the stands at some events, no one could seem to agree on when and how often athletes were allowed to remove their masks on the medal stand or if they were allowed to embrace — things they did anyway.

COVID-19 wasn’t the only issue the Tokyo Games faced.

Tokyo’s brutal summer heat and humidity, the chief concern before the pandemic broke out, wreaked predictable havoc and left some athletes and volunteers in need of medical attention. Men’s tennis star Novak Djokovic, the world’s top-ranked player, led the protests against the starting times of matches, which were eventually pushed back in order to take advantage of cooler temperatures later in the day.

The women’s soccer final was also shifted to a later time, and to a new venue, while the women’s marathon was brought forward by an hour.

The IOC was also forced to weather an international incident when Belarus attempted to force sprinter Krystsina Tsimanouskaya to return to the country after she criticized her coaches for entering her in a relay she had not prepared for without her knowledge. Tsimanouskaya was driven to the airport to board a flight back to Belarus but sought the protection of Japanese police and days later was granted a humanitarian visa by Poland.

The aftermath of the Games will likely include an assessment of its true costs, in terms of the impact it had on Tokyo from a health standpoint and likely more questions about a budget some feel ballooned out of control.

Some may also wonder if the Games lived up to the two ideals that were supposed to be their driving force.

The first was a nearly forgotten pledge for the Games to showcase Japan’s recovery from the 2011 earthquake and tsunami, and the resulting nuclear disaster that devastated the Tohoku region.

That narrative was largely overshadowed by the pandemic. Softball and baseball games were held in Fukushima — and residents likely welcomed the U.S. softball coach’s effusive praise for the region’s peaches — but attention was mostly focused elsewhere.

More recently, and more heavily pushed by the IOC, the Games were supposed to represent perseverance in the face of the virus and show that the world was moving past COVID-19.

The latter message fell flat in the face of rising infections and the spread of the delta variant.

These Games haven’t helped the world move on and were mostly sequestered in a bubble that was meant to ensure the show went on even as COVID-19 infections rose in Tokyo.

Nevertheless, organizers can still point to the athletic drama and numerous memorable moments the Tokyo Games have produced in spite of the difficult circumstances.

“It is very, very difficult for me to find the words to describe how we had to overcome this situation and difficulties,” Hashimoto said. “Not everything was perfect but, overall, I believe people appreciated our efforts. Whatever the situation is, we can overcome — that is something we wanted to show to the world.”

Zambia: ‘We Will Be Ready for CHAN’ – Zambia Midfielder Sakala 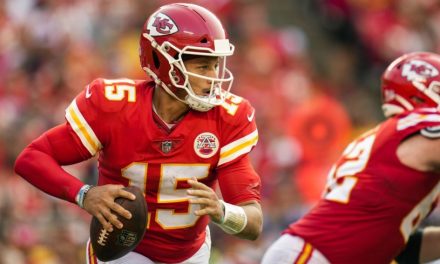 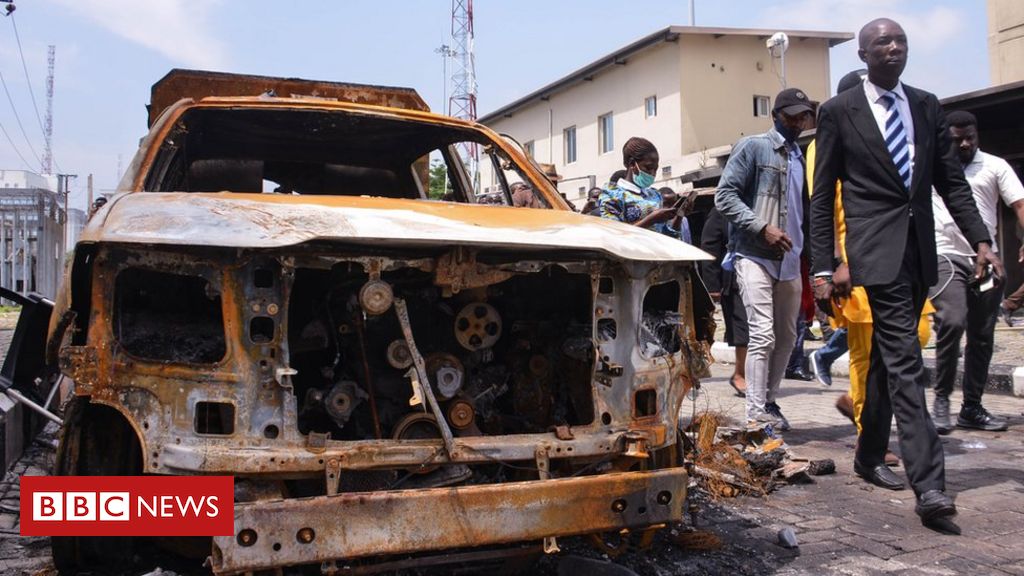 Nigeria’s Lekki shooting: What has happened so far at Lagos judicial panel